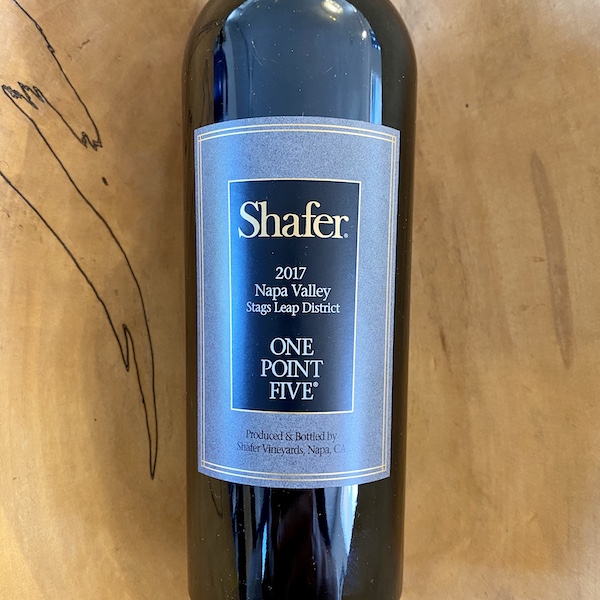 One Point Five is an elegant, silky Cabernet Sauvignon with plush tannins and abundant fruit that is approachable when young, yet capable of aging gracefully. This wine reflects the climate and soils of Shafer's Stags Leap District vineyard sites and their commitment to meticulous, sustainable farming and quality winemaking. “In your glass the wine introduces itself with enticing aromas of red and black fruit, baking spice, dark violets, lavender, wet stone, and cinnamon. The promise of all that delicious complexity is fulfilled with a racy Cabernet Sauvignon full of energy – juicy flavors of red plum, cherry, cassis, black tea, and cola – all beautifully packaged together with ripe, bright tannins made for right now enjoyment as well as long term aging in your cellar.” — Elias Fernandez, winemaker.

When Doug and John Shafer started working together in 1983, the winery’s future was an unknown. John Shafer’s first wine, 1,000 cases of 1978 Cabernet Sauvignon, had been on the market about 18 months. Even though it would go on to win accolades, it took a lot of time to get that first Cabernet on store shelves and restaurant lists. For the father-and-son team it was the start of a working relationship that would last more than 30 years – a partnership that is embedded in the name One Point Five. “Most family owned businesses have their second-generation story – a first generation handing over the reins to a second,” says Doug. “Things happened differently here. Dad and I were in this together early on and learned the business side by side.” They coined the term “a generation and a half” to differentiate theirs from a traditional second-generation story. From that comes the name One Point Five.