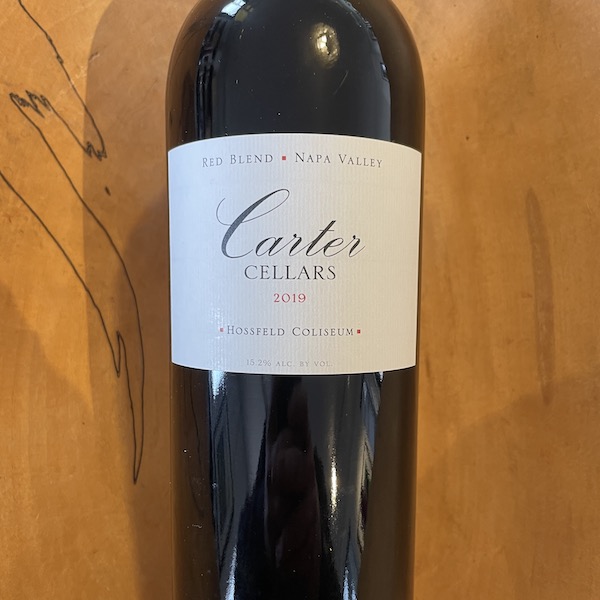 Deep bright red colors are met by aromas of black cherries, crushed rocked and loads of fruit. The natural acidity derived from the vineyard coupled with a concentrated extraction, frames an amazing midpalate that highlights juicy dark fruits, cocoa, and exotic spices. The silky and balanced finish is wrapped in ripe, lush tannins that showcase the best traits of a Merlot and Cabernet blend from Napa. Hossfeld Vineyards is a family owned and operated, extreme hillside vineyard, perched high above the valley floor in the eastern hills of Napa Valley. This dramatic site, steep and terraced like a Roman Coliseum has distinctive volcanic soils and as such, the resulting Cabernet fruit is also quite distinctive by offering structured graphite and herbal scented, compelling flavors. The Hossfeld family has been growing the five Bordeaux varietals at our vineyard estate since 1981.

Carter Cellars first vintage was in 1998 sourcing grapes from the steeply terraced Coliseum Block of the Hossfeld Vineyard. In continuing to source wine from top Napa vineyards Mark and Nils made a svelte Fortuna Block Cabernet from the ancient red volcanic soils of the Fortuna Vineyard in 1999. In 2000 Carter Cellars began a long and deeply rewarding relationship with the most iconic vineyard in the western hemisphere: the Beckstoffer portion of the original To Kalon Vineyard in Oakville. Thus began the rise of the famed and highly rated Carter Cellars Beckstoffer To Kalon Cabernet, a wine that to this day continues to receive top scores from wine critics.