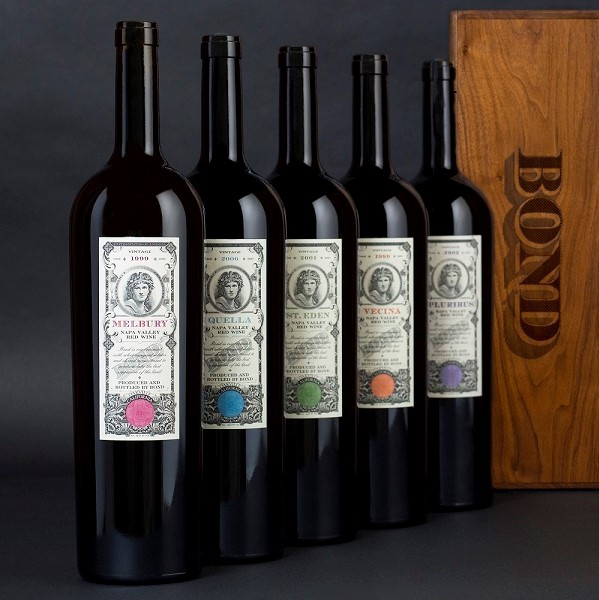 BOND Melbury Red 2018
The season began much later than the other crus with budbreak occurring in the last week of April. The unique clay that overlays this hillside vineyard allowed the vines to flourish due to a timely spring rain. Fruit set was small, given the nature of the vintage. Harvest was finished in one week during mid-October. "The spherical entry releases an impetuous energy that flirts with the edges. The wine gently settles into its normal position with the depth and charm that are so ubiquitous among the vintages from this cru. There is a feeling of joy that sits beneath the surface of an enveloping and generous finish." -Cory Empting, winemaker.

BOND Quella Red 2018
Budbreak occurred at the end of the first week of April. The growth in the early part of the year was very optimistic, leading to a generous bloom. The BOND team was very strict during the fruit-thinning phase before veraison, allowing the vines to progress without undue stress until harvest, which began in late September. "Mineral aromas are an ode to this ancient hillside riverbed. There is an uncharacteristic richness that unfolds and builds, before branching into delicate laterals that diffuse effortlessly. The weave of the wine is open-knit, while the finish is seamless, enlivened from within by a fine harmonic vibrance." -Cory Empting, winemaker.

BOND St. Eden Red 2018
Due to the low rainfall in winter, the BOND team pruned the vines shorter than in previous years to focus the growth. This decision ultimately led to a lower yield than is typical for this site. An unexpected but welcome rainfall in the early spring allowed the vines to grow to their potential. Harvest began in the last days of September and was completed nearly one week later. “Dark fruits intermixed with hints of fresh herbs create a nuanced nose. The wine enters flush with fleshy textures, while an undercurrent of acidity emerges next, carrying the wine’s mineral tinges along the palate. The wine is slightly svelte yet retains depth. The long finish is defined by an unforgettable vibration that keeps the wine both alive and vivid.” -Cory Empting, winemaker.

BOND Vecina Red 2018
It was another precocious year for these old vines. From budbreak through bloom, veraison and harvest, each event occurred earlier than is typical. Bloom was healthy, leading to long and well-formed clusters. Unlike the other sites, harvest here stretched over a longer period, as the BOND team committed to nine harvest passes, starting in late September, and concluding three weeks afterward. “The aromas are vivid and savory, yet the virtue of this Vecina resides in its stoic nature. The electric impulse that pervades the other 2018s, in this wine, manifests itself uniquely, passing like a steel blade through its vertical structure. Though the physique of the wine is muscular, the texture is extremely fine. The finish has a wise austerity that resolves with a persistent resonance.” -Cory Empting, winemaker.

BOND Pluribus Red 2018
An unusually temperate growing season allowed the vines to retain their vivid aromatics. Bloom was prolific, giving birth to a larger-than-average yield. While tasting grapes in early October to determine the moment of harvest, winemaker Cory Empting and his team felt that the moment was already upon us. They responded by harvesting the entire vineyard over three days. “The hallmark aromas cover the full spectrum of resin, torrefaction, and dark berries, which transport one to the edge of the forest. The palate is quite exotic for such a young Pluribus, as the usual youthful energy has been complemented by layers of soft, supple tannins. It is as if time has simultaneously sped up and slowed down, allowing us to appreciate, in the same moment, the youth of the wine and the maturity of the vines.” -Cory Empting, winemaker.